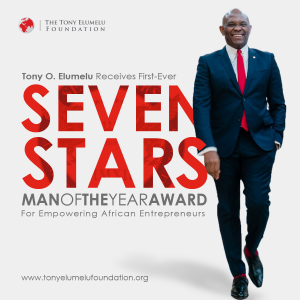 LAGOS, NIGERIA – 08 October 2019: Tony O. Elumelu, CON, Founder of the Tony Elumelu Foundation (TEF) and Chairman of Transcorp Plc, received special recognition as the Seven Stars first-ever Man of the Year award for his notable commitment to entrepreneurship in Africa and globally, through his Foundation at the just concluded 7th Annual Seven Stars Luxury Hospitality and Lifestyle Awards (SSLHLA). Transcorp Plc carted away four awards at the event.

The award was received by President/CEO of Transcorp, Valentine Ozigbo, on Mr. Elumelu’s behalf. Special awards were equally given to Mr, Ozigbo as the Seven Stars Hospitality Personality of the year, along with Transcorp Hilton Abuja’s Signum Virtutis (Seal of Excellence) in the Hotels Sector for Nigeria and the SSLHLA Business Hotel – Africa Special Award for 2019; making it the fourth consecutive year the hotel has attained this prestigious recognition. SSLHLA is a global organisation which acts as the custodian of the Signum Virtutis (Seal of Excellence), the highest, most exclusive award for the pinnacle of luxury hospitality and lifestyle.