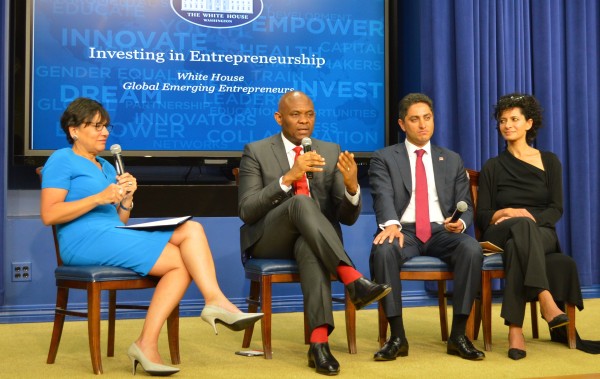 Mr. Elumelu, who is Chairman of United Bank for Africa, and Founder, the Tony Elumelu Foundation, spoke at a White House event hosted by United States President Barack Obama on May 11 to celebrate emerging entrepreneurs around the globe. The  event was a prelude to Obama’s scheduled trip to Kenya this summer for the Global Entrepreneurship Summit.

During remarks to announce the Summit and his plans to participate, President Obama thanked the global coalition of entrepreneurship organizations that collaborated with his administration to launch the Spark campaign for global entrepreneurship, a campaign in which the Tony Elumelu Foundation is a founding member.   The President went on to say to the entrepreneurs present, “Entrepreneurship empowers people to no longer be subject to aid agencies, but to be part of something to pursue their dreams.  Entrepreneurs like you can change the world one idea at a time.”

During his comments at the White House event while participating on a panel moderated by United States Secretary of Commerce Penny Pritzker, Mr Elumelu championed the cause of African entrepreneurs as the primary drivers of Africa’s transformation. In closing, Mr Elumelu provided the following advice to global entrepreneurs, “Entrepreneurship is a long term journey.  Great entrepreneurs are not made overnight.  Dare to dream, implement your dream, and stay focused.”

Elumelu’s foundation recently launched the $100 million Tony Elumelu Foundation Entrepreneurship Programme, which aims to assist in growing 10,000 start-up companies across the African continent over the next 10 years -―  demonstrating a commitment to empowering entrepreneurs to drive Africa’s social and economic transformation. 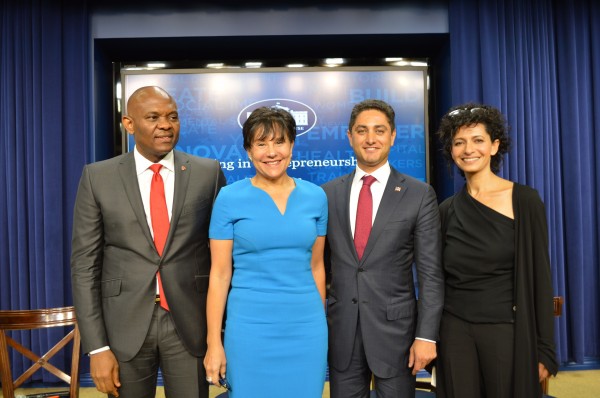 Accompanying Mr Elumelu to the White House was Shadi Sabeh, a young Nigerian entrepreneur from Sokoto State who is a mentee of Mr Elumelu and a past winner of the Tony and Awele Elumelu Prize for Economics from Usman Dan Fodiyo University.

Following on the White House event, Mr. Elumelu delivered a lecture at Georgetown University in Washington DC on May 12 on the topic ‘Entrepreneur-Led Development: A New Model for Africa’.  The lecture was attended by a large audience including students, faculty, and alumni of Georgetown, as well as members of the US and African private sector, diplomatic core, and international development sector.

“I was honoured to speak at these high profile events in the US,” Tony Elumelu said. “As a successful entrepreneur, I will continue to communicate to the world the need for supporting and empowering African entrepreneurs as the most impactful and sustainable approach to Africa’s development. My mission is to share this message on a global scale, and inspire more African business leaders and global investors with an interest in Africa to take action.”