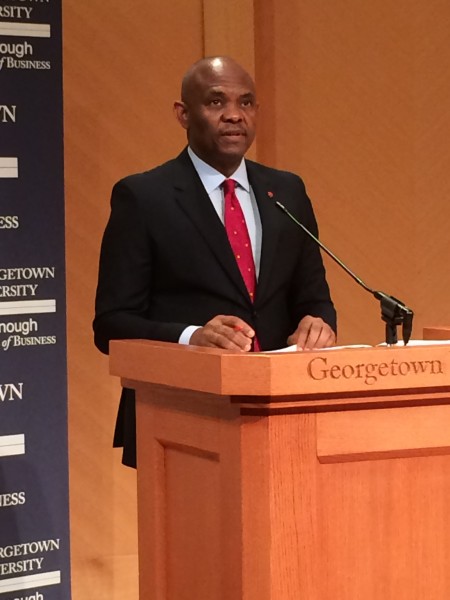 Thank you all for being here today, the second of my two days in Washington highlighting the importance of global entrepreneurship as a development model. Just yesterday I was honoured to participate as the only non-American speaker at a White House event on global entrepreneurship hosted by President Obama, who is speaking on your campus after this session this morning.

I want to thank President DeGoia and the Schools of Foreign Service and Business for this invitation to speak with you about “Entrepreneur-led Development, as a new model for Africa.”

I also want to thank a special student, Ms. Uzoamaka Ugochukwu, for her initiative and efforts to make today’s event happen.

Additionally, I want to salute my friend, Dr. Raj Shah, the esteemed former head of the US Agency for International Development (USAID), who just joined your fine institution and, under whose leadership the generosity and innovation of the American people has been expressed with great results and value for money.

I accepted this invitation to speak to you because as the future foreign services officers and business leaders of America, your perspective on development will influence US policy and investments in Africa. I am honoured to speak in this prestigious institution, founded on Catholic principles including solidarity, care for the poor, the dignity of work and working for the common good.

These principles can also be found at the heart of the international development agenda.
PERSPECTIVES ON DEVELOPMENT

I will start by stating the obvious.

No one here questions whether development is desirable.

No one questions the inherent need to save lives and help others by giving. However, I believe that we need to rethink the ways in which we help others. We need to give from the perspective of empowering the recipient, instead of making them dependent on us.

The reasons we pursue development, like a lot of things, are a matter of perspective. For instance, in recent years, the U.S. development community has argued that development is a security issue for the United States – that not only is it a moral ideal for Americans to promote prosperity, but also that Americans will not be safe in a world that is filled with economic disparity, and the severe and disproportionate suffering of others. This perspective was adopted by the Obama Administration, and Development has been elevated to become one of the pillars of U.S. national security, alongside Defence and Diplomacy.

From the African perspective, development:

Similarly, the practice of development is also a matter of perspective.

Traditionally, in western societies, the concept of African development is linked to foreign aid. And we’ve seen various iterations of it- from Cold war aid, where billions of dollars were wasted with the aim of buying the loyalty of non-aligned countries; dependency creating aid, and finally, to the new model of delivering foreign assistance that is linked to targeted outcomes and measurable results.

However, the various aid regimes have mostly retained the same principle, which is for donors to invest in the basic health and education of people, in their access to food etc., in the hopes that they and their countries will eventually make something of themselves. However, I also think that if we help people make something of themselves, by investing in jobs and economic opportunity, the beneficiaries will purchase healthcare, they will purchase education for their children and look after their families. Even further, they will invest in healthcare and education start-ups to serve their own communities. They will lift themselves out of poverty.

Essentially, I’m saying that humanitarian assistance and economic opportunity are two sides of the same development coin and we must not focus on one side of the coin at the expense of the other.

And while I stand here today as an African grateful for the lifesaving anti-retrovirals that have saved so many of our people, the vaccines, the emergency food assistance and the debt relief provided to my fellow African citizens, it is the economic opportunity side of the development coin that I believe will have more catalytic impact in driving development on the African continent. This is what I want to focus on today.

ODA vs FDI AND THE GROWTH OF THE AFRICAN PRIVATE SECTOR

Let’s look at some empirical data.

Now, ODA is easily and directly linked to development objectives.

Unfortunately, not enough attention is paid to leveraging FDI to create economic opportunity, the other side of the development coin. And this is critical because FDI will continue to rise, as international capital travels further and further away to seek greater returns from other shores.

According to the World Bank, Africa provides the greatest return.

So, Africa is moving towards becoming the engine of global economic growth.

FDI aside, what African capital has been doing on the continent, over the last decade has been simply stunning. For many African countries, the largest levels of FDI are from Nigeria and South Africa rather than from outside the continent. And there are a few examples of this increasing trend of Africans investing significant resources in their own countries and across the continent:

More companies like these across multiple sectors are featured in the soon-to-be released book, “Africans Investing in Africa,” a research partnership between the Tony Elumelu Foundation and the Oppenheimer family’s Brenthurst Foundation. Companies such as these are creating hundreds of thousands of jobs, in multiple countries, and integrating the continent more each day.

And each job means:

This is what I’ve been preaching – that the private sector has a role to play in Africa’s development.

I call this Africapitalism.

Africapitalism means that we cannot leave the business of development up to our governments, donor countries and philanthropic organizations.

And African businesses usually come down to individuals. Behind most companies are an entrepreneur.

I’ve enjoyed a lot of success in my chosen pursuits but, when it comes down to it, what I am is an entrepreneur.

And I recognize and embrace the responsibility that I have to play a role in Africa’s development.

I have come to understand that the most important thing I can do to advance our development is to help replicate my success in others and to evangelize the cause of entrepreneurship.

THE CASE FOR ENTREPRENEURSHIP

I count myself among those who believe that five entrepreneurs built and transformed the U.S. into what it is today – John D. Rockefeller, Cornelius Vanderbilt, Andrew Carnegie, Henry Ford and J.P. Morgan. Similarly, I believe we must recognize entrepreneurs as key drivers of development in Africa and prioritize them in African policy and philanthropy.

And here are some of the reasons why.

Supporting entrepreneurship means creating policies that improve the enabling environment for millions of potential job creators to succeed rather than for a small number of government or private entities.

And, over the last two decades, here is what I’ve learned about African entrepreneurs, specifically:

These are the people who can fuel our future, but who often lack the capital, the training or the support to take their strong small business to national or regional scale.  In Nigeria alone, 95% of start-ups fail in the first year, often due to reasons that can be resolved with the right policies

The Tony Elumelu Entrepreneurship Programme is designed to identify 1,000 African entrepreneurs every year for the next 10 years and provide them with much needed seed capital to actualize their business idea.

But it goes beyond that – we have already harnessed the talents of 400 mentors to support the first batch of 1,000 entrepreneurs who were chosen with the assistance of Accenture and a Selection Committee from a pool of over 20,000 applicants from 54 African countries. They are currently receiving additional online training, and will attend a two day boot camp in Lagos in July to prepare them for the challenges of business and allow them to network with their peers across Africa.

All they need to apply is a business idea and the commitment to succeed.

The Tony Elumelu Entrepreneurship Programme is an act of faith in our entrepreneurs to transform our continent. Because business isn’t just about money.

It’s about values, plans, and community.

And it’s about development!

I believe that by the end of this “Decade of entrepreneurship,” thousands of businesses will grow and flourish, and drive sustainable prosperity across Africa.

This is my vision.

But Tony Elumelu alone cannot make this happen. And the good news is I don’t have to. I want to recognize and appreciate the role of political leaders such as Presidents Paul Kagame of Rwanda and Barack Obama of the United States, and established entrepreneurs and philanthropists like Jeff Skoll, the Omidyars and Richard Branson, in supporting entrepreneurship as a development path for Africa.

I especially want to thank President Barack Obama for understanding that we have to encourage and support young people to become economic players in their countries. The Obama administration’s Spark Initiative that the Tony Elumelu Foundation is collaborating with is dedicated to promoting entrepreneurship all over the world, as a key foreign policy priority.

As I mentioned in my opening, just yesterday, President Obama hosted a White House event that brought together budding entrepreneurs and prominent business leaders to help Start the Spark of entrepreneurship, leading up to a Global Entrepreneurship Summit in Nairobi in July.

So there was a strong sense of fulfillment for me to be invited to the seat of your government to share and hear other perspectives on this profound topic and the power we are unleashing to develop our continent.

The future we all want for ourselves is one of our own making.

So, I want to finish by urging policy makers and the international development community to recognize and embrace entrepreneurship as a new model for the development of Africa, and beyond.

I have contributed $100 million to this cause, and have made it my life’s mission to empower Africa’s entrepreneurs. I challenge all to consider what you can do to make the entrepreneur led development model work for the benefit of every African.

And to the students here today, I want to say that as you walk the halls of this prestigious university, in the pursuit of your own path, confident in your own ability to create the future that you imagine, understand that Africans want the same for themselves.

Therefore, whatever course you choose to take in the services of others, be guided by the goal of unleashing the inherent potential that resides in each and every one of us.

And finally, congratulations to the graduating class of 2015!!