“Despite the potency of sport/football in promoting unity, it is never a match for the TEF forum convergence”

This year’s convergence of African entrepreneurs at the 2019 Tony Elumelu Foundation (TEF) Entrepreneurship Forum was unarguably the largest gathering of young African entrepreneurs. More impressive was the fact that it was facilitated by an individual non-state actor, whose convening power drew the attendance of five African leaders, state governors, private sector leaders, o the city of Abuja, Nigeria.

Paradigm Shift in the Ideology of the African Economy

During the period between the 1950s and 1980s, many African countries, particularly in the West, East and Central regions of the continent adopted and attempted to adapt the Marxist-Leninist socialist economic model to push the growth of the newly independent states. It also adopted tactics in the struggle against colonial rule in other countries still under the control of Europe. Western capitalists were unrelenting in perpetuating post-colonial imperial rule through aid and financial assistance/grants. Within this period, over 600 billion dollars was transferred to Africa without commensurate socio-economic impact.

Fast forward to the present – the 2019 TEF Entrepreneurship Forum was an explicit revelation of the aggressive resolve of capitalism to democratise the economy of the entire African continent, a project being led by the organized private sector. The ambitious and audacious step of Tony Elumelu with his USD100million commitment to identify, mentor, train and fund 10,000 young African entrepreneurs across the 54 countries of the continent has apparently compelled African leaders to consider the redeeming option of capitalism (Africapitalism in Elumelu’s word) as a panacea to ending poverty and impoverishment in Africa. The western developmental institutions seem to be swayed by Elumelu’s ingenuity as the United Nations Development Programme (UNDP) has just recently pledged to support the project with sponsorship of 100,000 beneficiaries; the African Development Bank, the International Committee of the Red Cross (ICRC), among others also committed to funding a sizeable number of young entrepreneurs.

It will be difficult, henceforth, for African leaders to ignore a concept projected to mobilise fund for millions of the continent’s youths.

SMES TO THE RESCUE

It was the consensus of speakers and delegates at this year’s TEF Forum that the Africa economy can only be transformed with massive investment in Small and Medium Scale enterprises. Hence the USD5,000 seed capital for each selected applicant offered by the Tony Elumelu Foundation through its flagship Entrepreneurship Programme presents a reliable model to seed fund SMEs while tracking their progress. The CEO of the Foundation, Ifeyinwa Ugochukwu, stated in her speech, that to empower 1million young Africans, 5billion dollars would be needed. These 1million entrepreneurs would then create 25million jobs the continent desperately needs. Evidently, Fareed Zakari, the CNN GPS anchor who moderated the presidential dialogue involving Heads of government of five African countries declared that 85% of jobs in Europe in the last 5 years were created by SMEs. His view corroborates an earlier statement by Nigerian Vice President, Prof. Yemi Osinbajo, who gave testimony of some African youths who are making a continental and global statement through their innovation and their enterprise. 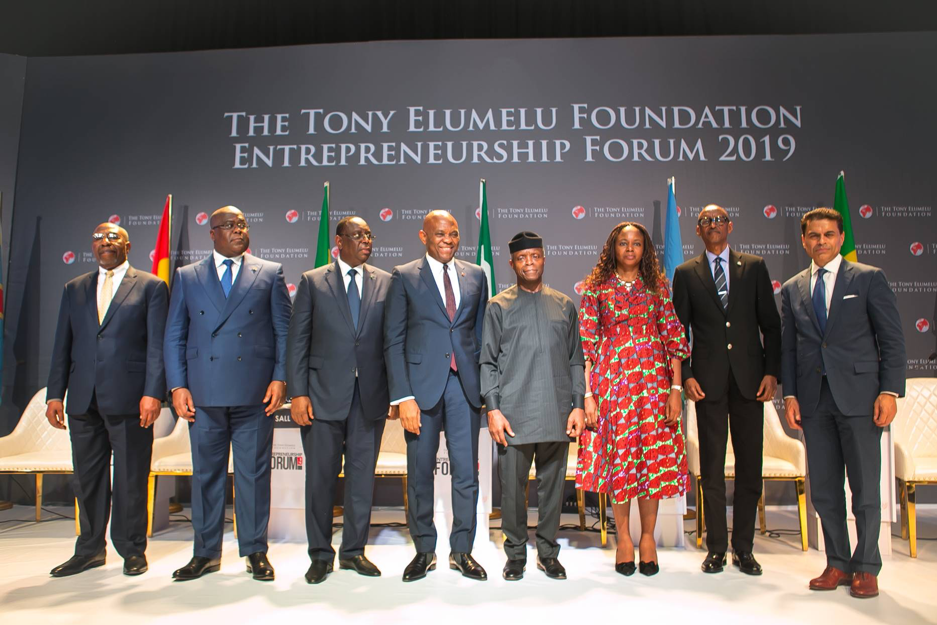 Since the coming on board of the Organization of African Unity, OAU, African nations have struggled to achieve unity. Apart from a significant success in the struggle against colonialism, there are yet significant milestones for the organisation, now in its 39 years of existence, to achieve.

However, the convergence of thousands of youths from across the continent is quite phenomenal and signposts a new dawn in the African socio-economic Renaissance and Unity. For what unites people most is economic interest. This event, which was the fifth in the series, is unarguably the first time African youths would gather anywhere on the continent to engage their governments, interact with one another and form partnership for prosperity (Now, thanks to the Tony Elumelu Foundation, I have friends in Chad, Kenya, Tanzania and Zimbabwe).

Despite the potency of sport/football in promoting unity, it is never a match for the TEF forum convergence.

By implication, what the OAU/AU has been unable to achieve in the economic, social or political spheres has been pioneered by just an individual player in the private sector—Tony Elumelu. It is therefore instructive that African leaders should without much ado, key into this concept which can serve as a verifiable tool of economic development, promotion of African unity, youth participation and an end to continental terrorism.

Notwithstanding my observation above about the potency of this singular individual effort to promote continental cohesion and integration, the event clearly manifested the continued division among the 54 African countries. For the two days of the Programme, I observed with keen interest, the participating nations, I noticed that the Northern and Southern Africa were not quite as represented in numbers as their Western and Eastern counterpart.

Despite the obvious conscious efforts by the Tony Elumelu Foundation to increase the applicants in rural areas into its Entrepreneurship Programme (and more recently, it launched a partnership with UNDP to empower 100,000 young African entrepreneurs with a focus on rural dwellers), there needs to be a more conscious effort to include rural dwellers at the Forum to balance the representation among attendees. Conscious efforts must continue to be made to create more opportunities in rural areas. 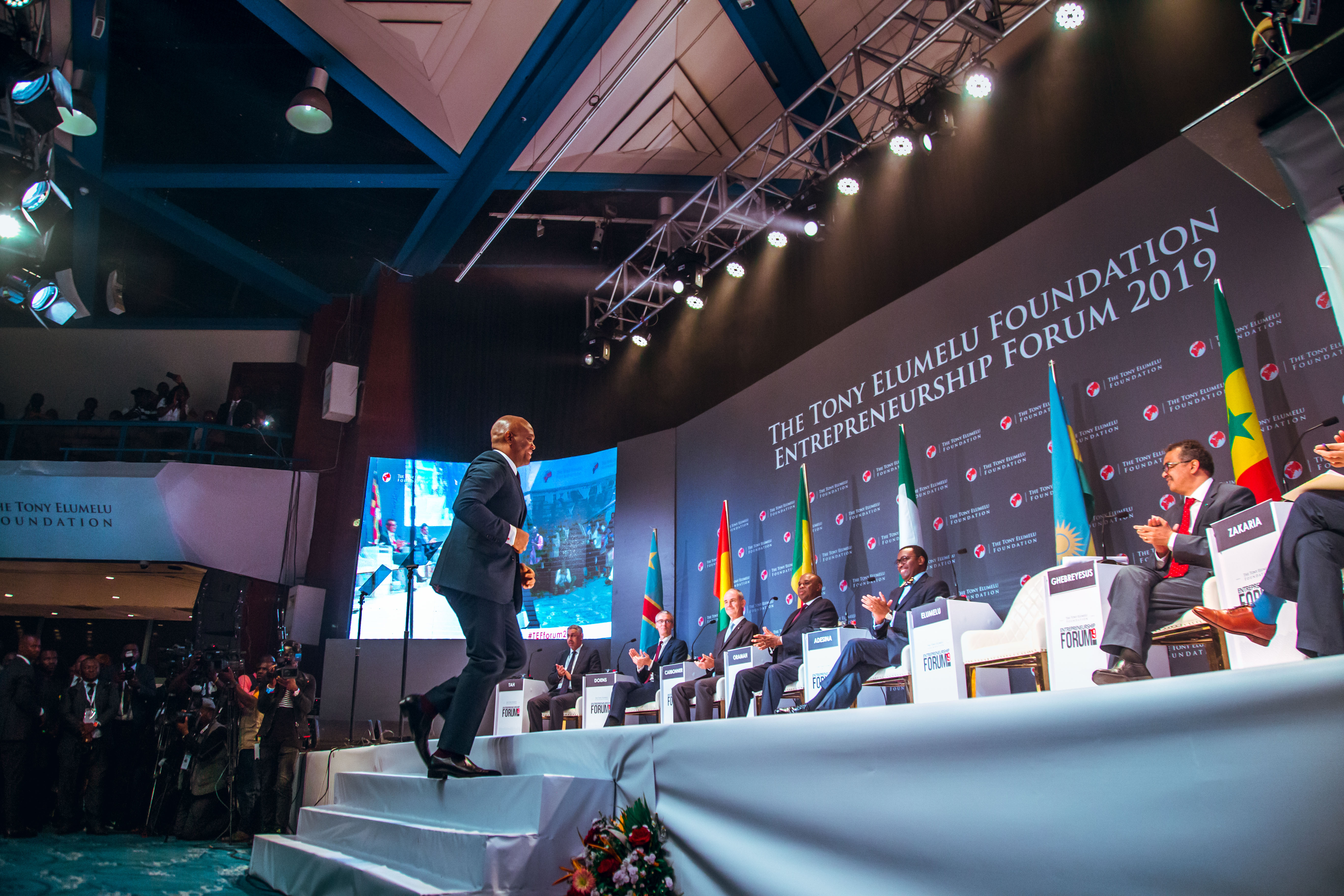 Albeit, the capitalist system always provides the space and policy for the donor-charity inclined persons to recoup their investment, the example of Tony Elumelu has pioneered is worth emulating to reduce the obvious frustration that could lead to catastrophes if the hopelessness among young persons in Africa continues unabated.